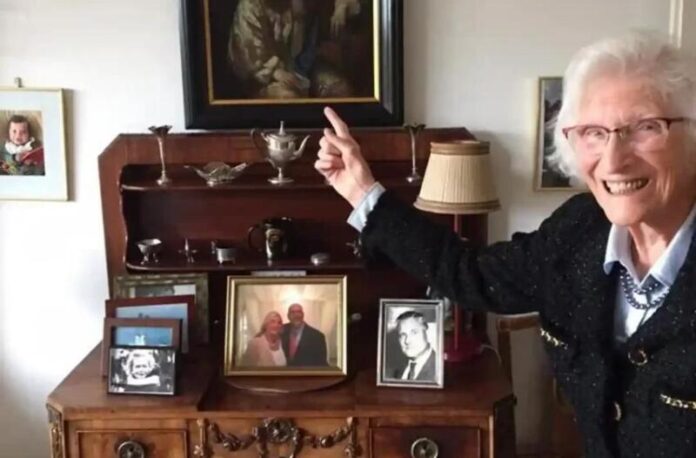 A 101 year-old Dutch woman has been reunited with a painting that Nazis stolen during World War 2. Charlotte Bischoff van Heemskerck had not seen the painting in over 80 years when it was rediscovered in 2021.

The painting belonged to her father, who was a doctor and director of a children’s hospital in Arnhem, in the Netherlands. The prized piece is a 1683 portrait of Steven Wolters by Caspar Netscher, The Guardian reports. Charlotte’s father was forced into hiding after rejecting Nazi orders, but kept his painting in a bank for safekeeping. After the Nazis invaded The Netherlands in 1940, they looted the bank and took for painting.

The painting became lost after the war, changing hands several times. It appeared at an art gallery in Düsseldorf in the 1950s, before finding its way to Amsterdam where it was auctioned in 1969, and was finally bought by a private collector in 1971.

The painting was found by Commission for Looted Art, a non-profit that tracks down and recovers looted art for the original owners. They negotiated with the same private collector that had bought the painting in 1971. It was returned to Charlotte in 2021.

“I was amazed,” Charlotte recounted to The Guardian. She said that her father, who died in 1969, would have been “so happy that it came back”.

After keeping the painting for six months, Charlotte is now selling it, and plans to split the proceeds between her siblings’ children.

“I had five brothers and sisters. There are 20 offspring and they are very sweet, so I never had the feeling that it was mine. It’s from the family.” she said.

Know somebody that needs a positive news boost? Share this good news story on any of the social media networks below.

Subscribe to The Good News Hub to get your weekly dose of good news.

This website uses cookies to improve your experience while you navigate through the website. Out of these, the cookies that are categorized as necessary are stored on your browser as they are essential for the working of basic functionalities of the website. We also use third-party cookies that help us analyze and understand how you use this website. These cookies will be stored in your browser only with your consent. You also have the option to opt-out of these cookies. But opting out of some of these cookies may affect your browsing experience.
Necessary Always Enabled
Necessary cookies are absolutely essential for the website to function properly. These cookies ensure basic functionalities and security features of the website, anonymously.
Functional
Functional cookies help to perform certain functionalities like sharing the content of the website on social media platforms, collect feedbacks, and other third-party features.
Performance
Performance cookies are used to understand and analyze the key performance indexes of the website which helps in delivering a better user experience for the visitors.
Analytics
Analytical cookies are used to understand how visitors interact with the website. These cookies help provide information on metrics the number of visitors, bounce rate, traffic source, etc.
Advertisement
Advertisement cookies are used to provide visitors with relevant ads and marketing campaigns. These cookies track visitors across websites and collect information to provide customized ads.
Others
Other uncategorized cookies are those that are being analyzed and have not been classified into a category as yet.
SAVE & ACCEPT
Go to mobile version